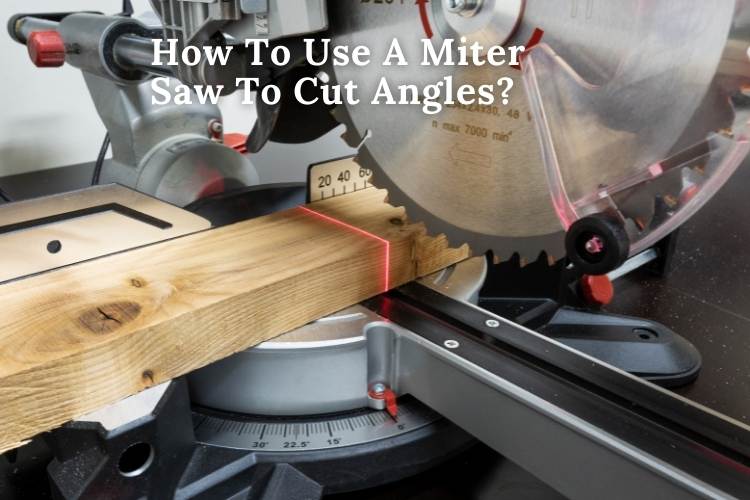 Miter saws are indispensable when it comes to cross-cutting on a piece of wood. No other tool can reproduce the exact result, whether it is a 45 degree or an acute angle cut for your decor. However, you might easily run into problems if you don’t know how to use a miter saw to cut angles.

Need more information on the miter saw and cutting angels? The rest of the article provides comprehensive knowledge and a step-by-step guide to using a miter saw.

What Is A Miter Saw?

A Miter saw is a very popular woodworking tool that allows you to cross-cut wooden beams. The cutting scope is not necessarily limited to cutting beams; it can also cut décor pieces accurately.

In the world of woodworking, miter saw has been an irreplaceable tool for many years. Due to its high performance and capability of repeating the same cut angle, it will always be a fan favorite.

Despite that, the tool went through some major development over the years. It not only makes the tool more versatile, but it also widens the working scope for all sorts of enthusiasts.

Vertical Miter Saw: This is the most basic form of miter saw that only has vertical cutting motion. You can effectively cut wood pieces at a 90-degree angle. It’s great for cutting length and trimming. Nonetheless, if you have the skills, you can make jigs or guides for various angle-cutting.

Compound Miter Saw: The next iteration of the miter saw comes with an angle scale. The scale allows you to cut not only 90 degrees but also any angle up to 45 degrees. In most construction where bevel and miter are imperative, a compound miter saw is a way to go.

Sliding Miter Saw: This is a technically vertical miter saw with a sliding mechanism. The problem with the traditional vertical saw is it only has a particular cutting length. But when you add a sliding rail to that, it significantly increases the cutting length. Now you can trim wider wood pieces in one swoop.

Sliding Compound Miter Saw: Well, that’s your compound miter saw along with the sliding feature. With this, you can cut wider beams and various angles if you desire. You should know this is where miter-saw starts to get expensive.

Dual Sliding Compound Miter Saw: This is the most feature-packed miter saw you can find in the market. It not only comes with a sliding rail and miter scale, but you can also tilt the blade as well. You won’t have to rotate your workpiece whenever cutting both ends. Just slide your beam and tilt the blade for the same cutting action on the other end.

It doesn’t matter what type of miter saw you use, your cut will match one of the following three types. Nevertheless, it is a powerful machine with lots of motion and angle access. The actual variation of cuts depends entirely on your skill level.

Length cut: It’s a pretty standard Cut miter saw that can perform. You just place the wooden piece and push down the blade on top of it. The cutting angle on this would be exactly 90 degrees.

Most of the time you will use this method to cut a certain length of a wooden beam. How long if you ask? As much as your design requirements. It’s exceptionally quicker than other similar cutting tools.

Bevel Cut: The bevel is essentially a Cutting method through the thickness or sideways of the beam. When you make a door frame, the three beams connect at a 90-degree angle. Each beam is precisely 45 degrees beveled at the connecting point. Similarly, you can use bevel cuts in so many construction line window frames, bed frames, and so on.

Miter Cut: Angle cut is more of a horizontal angle cut across the face of the wood piece. Let’s say you are building a picture frame that has a nice design on it. You need a 45-degree miter cut if you want this design to wrap around your entire fame. The same method applies to a door having beautiful carving on the edges. Two 45 degree miter cuts make 90-degree angles on each corner. And you can have your carvings on all edges.

Generally, these are the types of miter saw cuts you would see in carpentry. However, it is not necessary to always aim for a 90-degree angle unless your design requires it.

Anything less than 90 degrees is an acute angle. In most miter saw-scale, you can go up to a 45-degree angle cut. There are only a few miter saw variations that have the angle option less than 45 degrees. If yours doesn’t have one, you can make a jig and use that to cut below 45 degrees.

How To Cut A 25-Degree Angle With A Miter Saw?

As we said, in most miter saw you can only cut as low as 45 degrees at a time. So if you need a 25-degree angle, it will be a tricky one, but not too difficult.

Step 1: First, make a 45 degree cut to a small wood piece. This will be your guide to all the angles below 45 degrees. On a miter scale, it would be 45 as well.

Step 2: Place the angled piece just before the blade line or as close to the blade path.

Step 3: Now place the other workpiece parallel to the Angle of the guide.

Use this method to achieve any acute angle cut even if you don’t have an option after 45 on the scale.

How To Create An Obtuse Angle With The Miter Saw?

If you create an angle that is over 90 degrees, it’s an obtuse angle. For example, you have a décor piece design that has a 120-degree angle in it. So to get this 120-degree angle, you will need two 60 degrees angle cut pieces.

Set your miter scale to 30 because 90 minus 30 equals 60. Cut two identical pieces, when you join them together it will be 120 degrees.

If you don’t know how to read the miter scale, it’s easy to make mistakes. The markings on the scale do not represent the final output degree. In the same way, zero on the scale doesn’t mean it’s a zero (0) degree angle.

The best way to go on about this is anything on the miter scale is subject to subtract from the 90 degrees. So zero means 90 degrees, as 90-0= 90. The rest are the same.

Here is a quick chart for Miter saw angle

No carpenter’s toolbox is complete without a circular saw. With such power and utility, it's a no-brainer for any woodworker to have them. They are affordable too. On the contrary, as a handheld...

The Jigsaw is a versatile and powerful tool for cutting shapes. It can cut straight lines and curves in a variety of materials quickly. No matter if you are into DIY projects or professional...