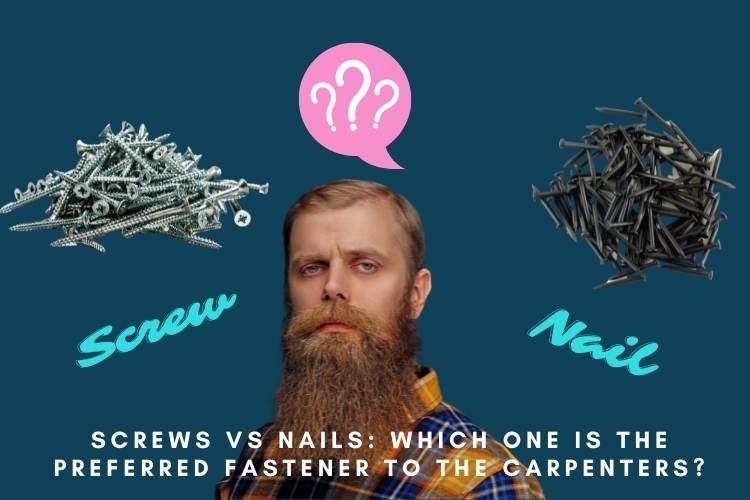 Before talking about the preferred fastener between screws vs nails, first, look at what it actually does for us. Typically, screws or nails are kinds of fastener that allows us to secure two things together; it is either wood versus wood or wood versus concrete, metal or plastic.

This is why both the screw and nail are the most significant construction elements. It is practically impossible to do any woodworking project like build or renovation houses, making frames or trusses, floor decking, sheathing, siding or outdoor fencing, making furniture, or kitchen cabinets without them.

However, in doing so, one query is chasing us all the time, which one is more appropriate – screws or nails? Or, more specifically – which one should be the most preferable for a carpenter?

So, let’s explore the difference between screw and nail, through which we can figure out which one is right for our upcoming project.

Table Of Contents Show
1 Screws Vs Nails: An Overview
1.1 What Is Screws?
1.2 What Is Nails?
2 Screws Vs Nails: Comparison
2.1 Grip Strength of Screws:
2.2 Shear Strength Of Nails:
3 When To Use Nails Vs Screws:
3.1 Applications Of Nails:
3.2 Applications Of Screws:
4 FAQ
4.1 Can You Hammer In A Screw?
4.2 Why Do Carpenters Prefer Screws To Nails?
4.3 Should You Nail or Screw Joist Hangers?
4.4 What Kind Of Tools Is Good To Drive Screw And Nails?
5 Conclusion

Screws Vs Nails: An Overview

Hi guys! Do you know, between the screw vs nail, which one is come first on the earth? According to history, nails (more exactly bronze nails) were first seen in ancient Egypt in 3400 BC and Screws, on the other hand, date back to the 3rd century BC in Greece.

Although it doesn’t matter much which one comes first as both are known to be a good fastening element if applied correctly. Both the screw and the nail can give you the desired strength and functionality.

But again, one cannot replace the other’s efficacy completely as there have some differences too. This difference comes from a single basic point –strength. Typically, the nails are designed for shear force, and the screws are for holding capacity.

If we discuss the strength factor, including some other points, we surely get the difference between screw and nail and when to use nails vs screws.

Generally, screw means turn or twist something to tighten.

However, in construction, a screw means a metal piece used to fasten two objects together. It is usually a small, slender, sharp-pointed metal pin that has a slotted head at one end and pointed nose at the other, and the middle portion, the shank, covered with a raised helical thread running around it.

This type of screw, also known as a self-tapping screw, is designed to cut its own thread in wood, plastic, or sheet metal. They are different from a bolt, though. Bolts are kind of machine screws having threads all through the body of a parallel shaft.

Our today’s discussion will be going to cover self-tapping screws or wood screws only.

Like a screw, nail a piece of metal, but instead of a slotted head, it has a broadened flat head, simple slim shank, and a sharp pointed end. They are usually set by using a hammer or nailer into the wood to connect items together or to act as a peg or hook.

Nails are much simpler to use and cheaper than screws and are widely used for woodworking purposes.

If we want to compare screws vs nails, the point that comes to our mind first is their fastening capacity. And this fastening or holding capability can be explained by the grip strength for screws and the shear strength for the nails. Let’s clear them below with diagrams –

It is the power of a fastener to hold two pieces of wood together against a vertical force. We can also describe it by withdrawal strength means the force that needs to apart two pieces of wood after affix by a screw. When a screw inserts into the wood, the threads are grasping the wood’s grain tightly and making it difficult to pull out.

For example, in the floor decking case, planks are connected with joists by screws to protect the vertical force exerted by our foot on that.

In engineering, the shear strength of a material or component is the ability to resist structural failure due to slide itself against the shear load.

In the case of a nail, shear strength is the amount of force that can withstand when the shear stress is applied from its side.

Nails are a kind of metal wire with a certain elasticity, which allows them to bend slightly under pressure (without snapping or breaking) to accommodate the force applied from the side direction.

For example, during deck building, a fastener is used to attach the joist with the frame to protect the shear force.

Besides the shear and tensile strength, the following factors also need to take into consideration while choosing nail vs screw.

When To Use Nails Vs Screws:

From the above discussion, we are clear that nails are good for protecting the sliding force, and screws are good for the withdrawal force. Now, it’s time to segment which one is appropriate for what job.

Apart from common, brad, or finish nails, there are other types of nails available on the market. That is ring-shank nails. Instead of the straight shank, they are hybrid in design. You will get both gripping force and share strength from this type of nail. Therefore, it can be used as a substitute for screws.

Can You Hammer In A Screw?

Yeah, you can use a hammer to place a screw on a ledger board or drywall. However, once it reaches the boards, it cuts a wide hole through its threads, which gives it a chance to pull the screw back out quickly again. So, you will not get the desired strength from it.

If you just want to use the hammer instead of the drill driver, first hammer a nail that is slightly smaller than the screw, extract the nail and then push the screw to achieve a better result.

Why Do Carpenters Prefer Screws To Nails?

Nails are less expensive, easier to install and remove, and increased share strength than screws. To know more on this topic, you may visit monroeengineering.com.

Should You Nail or Screw Joist Hangers?

A joist hanger is an essential connector to ensure the necessary durability of your structure. So, you need to connect to it securely. You may use either the nail or the screw for that. However, according to Barclay Simpson, if you use structural screws designed to work with joist hangers, in particular, they can achieve a better result than regular nails.

The allowable load for a floor when using a screw is 30 pounds means it can bear around 30 pounds of the load when apply to connect floors with the joist, which is a bit higher than the nails.

Again, Eugene thinks that 30 pounds doesn’t seem trivial, and it’s not likely to cause your deck to fall if you want to use nails anyway – it’s just not a big difference.

Therefore, if you want to reduce construction costs, you can go for nails. Or the other way, if you don’t have a budget constraint, you can use Simpson structural screws for your joist hangers.

What Kind Of Tools Is Good To Drive Screw And Nails?

There are two types of equipment for both screws and nails – manual or hand-operated tools and power tools. If you prefer hand tools, you can choose a Phillips screwdriver or hammer to drive screws and nails. On the other hand, if you need the speed of work and accuracy, you can select a drill driver and nail gun as your preferred tools.

When we plan to build a dream house or a farmhouse or even a mini-garage, we want to last those longer. So, it is important to ensure that the fastener we are going to use would have enough strength and power to carry, comply with the building code and withstand earthquakes or heavy storms.

If you’re going through our discussions above, I think you’ve already got what to use in your next project between screws vs nails.

link to Which Saw Should I Use For DIY Projects: The Decision-Making Guide

Woodworking enthusiasts are always wanting to improve their efficiency in the shop. From managing their time well to saving money to improving their workspace, woodworkers try to find solutions for...

Continue Reading
link to Warning: These 9 Nail Gun Mistakes May Destroy Your Dream

Nail guns are simply a tool to accomplish tasks faster and more effectively. They are typically used to fasten two pieces of wood together or drive nails into the materials when you need to build or...