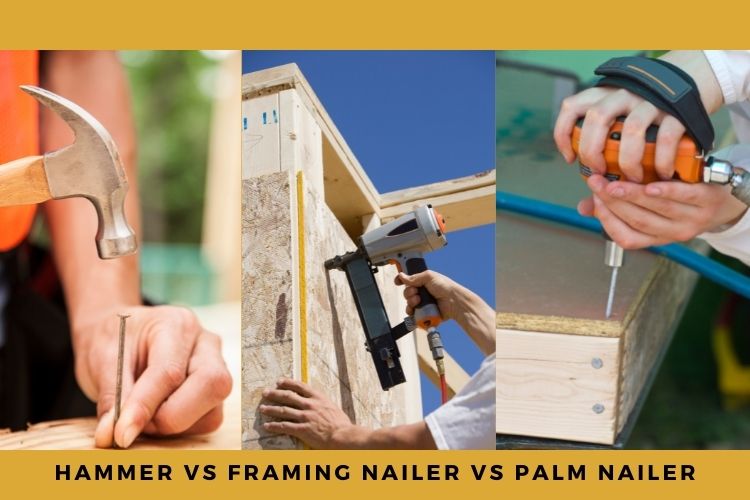 You’re a do-it-yourself homeowner who has to undertake some renovations, build something on the patio, or hang a picture or two on the wall every now and then. However, you may find that driving nails in those situations is inconvenient because neither a hand hammer nor a power nail gun appears to be sufficiently expedient.

You might be happy to learn that there is a third option that is somewhere in between the two. That’s the palm nailer, a little yet powerful tool for completing DIY projects with ease.

Today, we’ll go over the differences between a palm nailer, framing nailer, and hammer, as well as when each is best used, so you can make an informed decision about which one to use for your next DIY project.

Hammer Vs Framing Nailer Vs Palm Nailer: An Overview

One thing all three tools have in common is that they are all designed to help in nailing. However, a hammer is an ancient tool that requires physical exertion to employ, whereas framing and palm nailers are modern nailing methods designed for precision and comfort.

Every professional and homeowner is familiar with the hammer, which is an age-old tool (estimated to be 3.3 million years old). It can be used in carpentry, blacksmithing, stone breaking or shaping, percussive playing, and a variety of other applications. There are around 40 different types of hammers.

Our today’s focus is the framing hammer or claw hammer, which are commonly used in carpentry. A framing hammer is primarily a heavy-duty rip hammer with a straight tail (weighing roughly 20 to 32 ounces in the case of steel head), and a claw hammer is specially built for woodworking, capable of driving and pulling nails as needed.

Besides framing hammers, there are other types of hammers too that are suitable for small to medium woodworking or craft. Ball, cross, and straight peen hammer, Warrington, joiner, etc., are some examples that are good for finish woodworking, like making cabinets or attach the trim molding.

Until the invention of the power nail gun, the only pounding tool was the hammer. However, once framing nail guns arrive on the scene, the hammer’s effectiveness is questioned. Let’s look at the advantages and disadvantages of utilizing a hammer.

Benefits Of Using A Hammer

Drawbacks Of Using A Hammer

A framing nailer is a high-capacity nail gun that can be powered by an air compressor or a lithium-ion battery. It can drive nails into any lumber at high speed and at a faster rate for framing, decking, fencing, or room construction.

It can be pneumatic or cordless, depending on the power supply. While pneumatic framing nailers use compressed air pressure to drive a piston, cordless framing nailers employ lithium-ion battery power or a fuel cartridge to achieve the same results.

Pneumatic framing nailers are lighter and more popular among professional framers, whereas cordless framing nailers may be used anywhere without tangled hoses or hefty air compressors, making them a desirable option for DIY homeowners.

Let’s get the pros and cons of using a framing nailer below so you can compare it to the convenience and discomfort of using a hammer.

Benefits Of Using A Framing Nailer

Drawbacks Of Using A Framing Nailer

When a hammer refuses to deliver enough leverage to drive nails without risking your fingertips, and a framing nail gun appears bulky and expensive, a palm nailer can give comfort for your DIY projects.

You may not know what a palm nailer is, but if you’re into any type of home remodeling or design work, they might be your new best friend.

A palm nailer is an air-powered tool that uses common bulk nails instead of collated – which sounds like it would take more energy than just using regular old tools… right? Wrong! The truth is these are actually much easier to use on small jobs because they fire quickly with little recoil force required (which means less strain on your hand). Plus, there’s a kind of satisfaction you get from nailing something into the trusses or through the joist hangers to secure decking.

Though pneumatic palm nailers are the most common, cordless alternatives powered by lithium-ion batteries are also available. Cordless palm nail guns provide you the freedom to drive nails in any location with the same pounding force as a pneumatic nail gun.

It, like a hammer and framing nailer, has some advantages and disadvantages. Let’s have a look at those below.

Pros Of Using A Palm Nailer

Cons Of Using A Palm Nailer

Hammer Vs Framing Nailer Vs Palm Nailer: A Comparison

There is no clear victor in our hammer vs framing nailer vs palm nailer comparison. If you compare a hammer to a framing nailer, you’ll see that framing nailers are more user-friendly due to their accuracy and quickness. However, there are some scenarios that you won’t be able to solve without a hammer.

When comparing a framing nailer to a palm nailer, you’ll find that they’re both needed at distinct stages of the woodworking process. A framing nailer is the most preferable option for heavy framing works, and a palm nailer will be particularly useful for fastening joist hangers or metal studs.

So, which one you should choose relies totally on the situation you’re dealing with. Professional woodworkers amass a wide variety of tools for their toolbox. However, as a DIYer, you have the freedom to select the finest option for your needs.

No carpenter’s toolbox is complete without a circular saw. With such power and utility, it's a no-brainer for any woodworker to have them. They are affordable too. On the contrary, as a handheld...

The Jigsaw is a versatile and powerful tool for cutting shapes. It can cut straight lines and curves in a variety of materials quickly. No matter if you are into DIY projects or professional...